The store will not work correctly in the case when cookies are disabled.
Artikelnummer
SCOTIVTMS
Autor
Sergei Tiwjakow 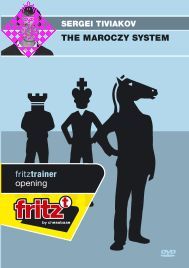 The Maroczy System of the Sicilian Defence is one of the modern openings where Black attacks the white centre mainly with pieces. After the moves 1.e4 c5 2.Nf3 Nc6 3.d4 cxd4 4.Nxd4 g6 5.c4 Nf6 the pawns c4 and e4 secure White a space advantage in the middle, however, it is exactly these central pillars which may easily become targets of the black counterattack. Sergei Tiviakov has been applying this system with Black in his tournament practice since 1991 and is considered one its greatest experts. His explanations make it easy to understand the black set-up where recognizing typical recurring piece manoeuvres is far more important than concrete knowledge of variations. The Maroczy System can be learned within the shortest of time, and due to its solidity it is best suited to score good results even against strong opponents. Video running time: 3 h 15 min.

Born in Krasnodar (Soviet Union), Sergei Tiviakov was a member of the Smyslov school and gained the titles of World Youth Champion at U16 and U18 levels. In the PCA-World Championships, he reached the candidates‘ matches in 1994; in the same year he represented Russia in the Chess Olympiads. Although he has considered himself a professional chess player since 1989, Tiviakov also fi nished his degree in agricultural economics. Since 1997 Tiviakov has been living in Groningen and he has become a naturalised citizen of the Netherlands. With his new home country he won the title in the European Teams Championships in both 2001 and 2005 and was victorious in the championship of the Netherlands in 2006 and 2007.

The former World Youth world Champion GM Sergei Tiviakov and top world player handles in his first ChessBase DVD the Maroczy system, a opening that is related with his name.

In my book case I have a old book from Peter Heine Nielsen and Carsten Hansen where they discuss the Maroczy system but the problem with this book is if you follow the recommendations you in many times you get a worse position.

This I can not say from the recommendations from Sergei Tiviakov these are filled with logical sense and he really understands how to handle the Maroczy!

Not covered on this DVD are possibilities with 5.Nc3 but Tiviakov focuses on the move 5.c4.

On the DVD's he says instructively when I wanted to win I played the Dragon but against strong players or if I wanted to draw than my choice was the Maroczy system.

Sergei Tiviakov is a good teacher and has no hurry to explain you all the secrets of this defence.

The strategy of this defence is based on space advantage and this is sometimes a nightmare scenario for black but Sergei Tiviakov leads you as no other throw this difficult defence.

Sergei Tiviakov tells honestly that he played around 80 games with the Maroczy and 60 of them ended in draw!

The running time of this DVD is around 3.15 hour and Tiviakov handles in that all in 23 well loaded multimedia files.

It is interesting to mention that the game file is good for 21 games where you find Tiviakov only on the back site of the bard.

It is clear Sergei Tiviakov knows as no other how to handle the Maroczy!