The store will not work correctly in the case when cookies are disabled.
Artikelnummer
LXGILTOU1914
Autor
Anthony J. Gillam 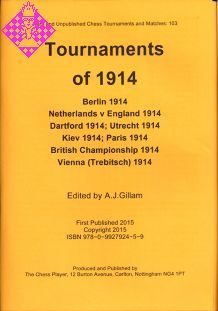 For obvious reasons, 1914 was not a great year for chess tournaments. After the beginning of the t" World War, August 1st, no international chess was

played in Europe or anywhere else.

The year had three major international events, all of them recorded in books: Baden bei Wien (Austria), agambit tournament played near Vienna in May. The games were all published in the last issues of Marco's Wiener Schachzeitung, which ended in 1916, and they have since been recorded in a book.

St Petersburg 1914 , the famous 2-stage tournament won by Em. Lasker, played in April/May, which has been published more than once.

Mannheim 1914 , the biennial German federation tournament which stopped abruptly on August t" when war was declared. A few of the 99 games from the top section are lost but the rest were published in the Deutsche Schachb/ätter during the war and, as a book, for the first time in 1964 to mark the so" anniversary. The tournament had 2 books to mark the centenary, in German and in English. The latter, Mannheim 1914 and the /nterned Russians also included all known games from the many 'interned tournaments' along with an extensive story of the internments.

St Petersburg AII-Russian Tournament 1914 , is number 98 in this series and has exactly half of the games played. Alekhine and Nimzowitsch finished equal first. .

Baden-Baden 1914 and Triberg 1914/15 were the first two 'interned tournaments' and all known games are included in the Mannheim book mentioned above.

Sadly, many of the games are lost be here you will find everything known at this point.