The store will not work correctly in the case when cookies are disabled.
Artikelnummer
LXGILTOU1929
Autor
Anthony J. Gillam 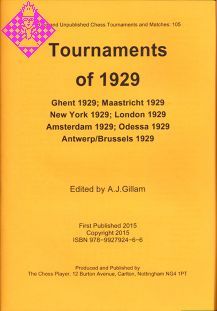 A round-up of some of the strongest unpublished events of the year with all known games and some background.

Approx. 150 games and positions, many with notes.

1929 was a year of many tournaments and ma,:\y of them have been published:

In addition, the games of Duisburg 1929 have been found and are being prepared for publication.

The tournament in Stockholm , always referred to as Stockholm 1928/9 was, in fact, played entirely in December 1928. The often repeated error in the tournament's date was caused by a printing mistake in the Swedish magazine which has since been endlessly copied.

After the appearance of this collection, the following tournaments remain to be published, if sufficient games can be found: