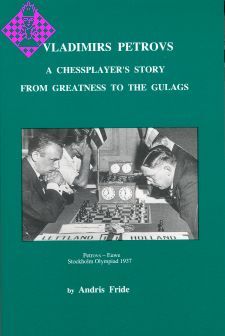 Vladimirs Petrovs from Latvia was one of the world's leading chessplayers from the mid thirties to the early forties, but due to the political tragedies that befell the Baltic States in WW II, he became a victim of the Soviet oppression and perished in a gulag in 1943. True to the Soviet style he also suffered the fate of so many who were imprisoned and murdered: obliteration of their records, lives, accomplishments... In great part, not only was his promising career cut short, but many of his fine games were lost or intentionally forgotten.

Petrovs greatest chess accomplishments were his tie for first at Kemeri 1937 with Flohr and Reshevsky, ahead of Alekhine, Keres, and Fine, and his outstanding performance at the Buenos Aires Olympiad in 1939 where he achieved a 72% score at first board for Latvia against the world's best players including Capablanca, Alekhine, Eliskases, Keres, Tartakower, and Stahlberg among others. As Golombek wrote: "Petrovs played the best chess at Buenos Aires 1939".

In this book there is a biographical account of his chess career along with all the 265 games that could be found. Notes, often by Petrovs and other outstanding players, are given to many of his best games. In addition information is given on the status of chess and chess personalites in Latvia, Estonia, and Lithuania.

Petrovs' style was largely positional, but he played many ingenious games involving advanced tactics as well. As White in the Catalan Opening he was extremely strong, as the reader can ascertain from studying those games. Hopefully, this work will help to set the record straight historically and will commemorate the artistic chess achievements of a world-class player.

ii About the Author