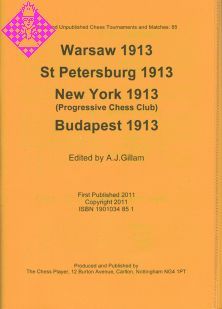 1913 was a year of few major international tournaments and so Duras spent much of the time travelling. He visited Warsaw and St. Petersburg in April, playing in a small, but strong, tournament in both places. These games have never been collected together before. He then went on to Moscow and played in another small, but not so strong, tournament the games of which have not yet been found. Later in the summer he arrived in New York where he played in the Rice Chess Club tournament (recently published) followed by another small, strong tournament at the Progressive Chess Club.

The three tournaments at Warsaw, St. Petersburg and the Progressive Chess Club, New York, are published here for the first time. My thanks go to Tomasz Lissowski of Warsaw for kindly translating the notes to the first two events.

Despite the fact that the tournament at Budapest in July 1913 was the Austro-Hungarian Championship, it received very little publicity. Marco, in his Wiener Schachzeitung, gave most of the games of the first two rounds but the tournament then seems to have slipped his mind. Extensive searches of chess and newspaper sources have failed to produce even half of the games and there seems little chance of finding any more.