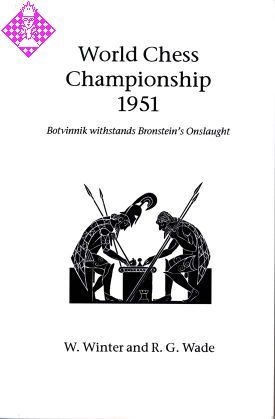 Descriptive Notation. This mighty clash between the top two Soviet Grandmasters was Botvinnik's first title defence after becoming World Champion in 1948. Amazingly, the man who had dominated Soviet and World chess was only able to defend his title by the skin of his teeth after a most ferocious and determined onslaught from his youthful challenger David Bronstein. The controversial 23rd game where a demoralised Bronstein may have resigned prematurely was the key to Botvinnik's ultimate success.

This book was written by two expert eye witnesses, former British Champion and International Master William Winter, and Bob Wade, International Master, vice-president of FIDE, the World Chess Federation, and later to be awarded the OBE for services to chess and chess education. Together these two acknowledged experts of the game give a thrilling first hand account of the intense intellectual drama of one of the most evenly fought battles in chess history.