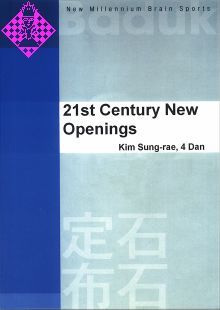 There is a Baduk proverb: "Josekis are not for memorizing, but for forgetting." The point is not to memorize the order of the moves, but to understand the meaning of each move in a joseki. This is what 21st Century New Openings does. In its 17 chapters, many of the modern josekis are analyzed in detail with emphasis on the reasons the crucial moves are made.

The book is divided into three parts; the first part is on joseki, the second on joseki and its relationship to the fuseki, and the third a sum­mary of the new patterns that are currently played by professionals in the beginning of the game. Every pattern is shown as it occurred in some recent professional game, so as to help the reader understand it more easily. Anyone who plays Baduk can understand this book, but it is especially recommended to those hoping to become professional players.

I previously wrote Korean Style of Baduk l, a book that covered the Small Chinese Opening and the Large Avalanche joseki. It has been well received in both Europe and USA. By writing this book, I could satisfy the interest that Westerners have in Baduk. Therefore, I feel that I have a duty to keep on writing other books as well.

Originally I was expected to publish the Korean Style of Baduk as a series of three volumes. However, I have decided instead to produce a book every 3 years to provide readers the latest information on joseki and fuseki. Therefore, I changed the title to21st Century New Openings.

21st Century New Openings is divided into three parts consisting of 17 chapters. The 1st part is on joseki, the 2nd part is on joseki and fuseki. The 3rd part is a summary of the new shapes in the beginning of the game. Every new shape is shown as it occurred in some professional game. This will help the reader to understand the shape more easily. Anyone who plays Baduk can understand this book, but it is especially recommended for anyone hoping to become a professional player.

Writing a book about joseki is more difficult than writing on other subjects. When a variation is created, you should be able to decide whether it is good or bad. However, in a corner it is sometimes quite difficult to decide which player's shape is more favorable. Even professional players sometimes have different opinions, depending on their own style. In this case, we simply say the outcome is even, but comparing the even variations of a normal joseki, the meaning is slightly different. Moreover, joseki and fuseki variations are changing, so when we say the result is even, it can change in the future. There is a Baduk proverb: "Josekis are not for memorizing, but for forgetting." So the point is not to memorize the order of the moves, but to understand the meaning of the moves in a joseki.

Subsequent volumes of the 21st Century New Openings are planned to be published simultaneously in Korea and in the USA (English version). I'm proud that even people from other countries are interested in Korean Baduk. I would like to thank Mr. Seong Ki-chang, for his help with administrative duties and his advice. I would also like to thank Dr. Sidney W. K. Yuan who helped with the publication of the English version.