The store will not work correctly in the case when cookies are disabled.
Artikelnummer
LOGALACGTTMPC
Autor
Joe GallagherNigel Davies

A Complete Guide to the Modern/Pirc Complex 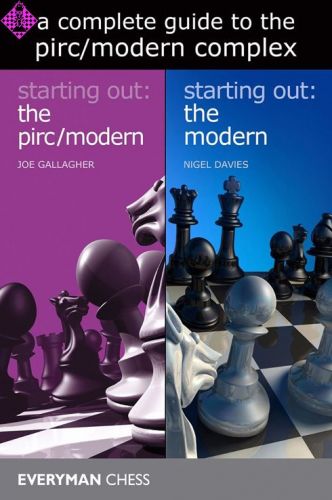 Everyman Chess's Starting Out series has firmly established itself as the leading guide to studying openings for up-and-coming players. These books are distinguished by their easy-to-read layout, the lucid explanations of the fundamentals, and the abundance of notes, tips and warnings to help the reader absorb vital ideas. Now brought together in one volume are ...

Starting Out: The Pirc/Modern by Joe Gallagher

Starting Out: The Modern by Nigel Davies

In this book, Davies studies the Modern by going back to basics, introducing the key moves and ideas, and taking care to explain the reasoning behind them - something that has often been neglected or taken for granted.

The Modern Defence is a dynamic, ambitious and universal opening, one that can be used against virtually every system White can play. Black's provocative strategy is based upon allowing White to construct an imposing pawn centre in the anticipation that a well-timed strike will bring about its downfall. Both sides can play for high rewards, albeit at some risk: White can hope to succeed with a direct attack or to squash Black with a space advantage, while Black will aim to destroy White's centre and mop up the remains. All in all this can lead to intriguing battles in which one slip from either side is often fatal..

011 The Austrian Attack and Other f2-f4 Lines