The store will not work correctly in the case when cookies are disabled.
Artikelnummer
LXDONALOTR
Autor
John Donaldson

A Legend On the Road 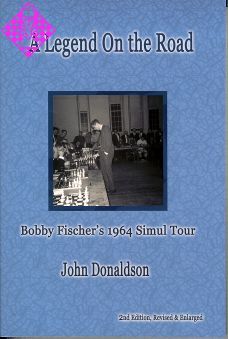 No chess player has received the worldwide recognition that Bobby Fischer has. His match for the World Championship with Boris Spassky in 1972 made Fischer a global figure. Silent for twenty years, he returned to the limelight with his return match against Spassky in Sveti Stefan.Today Fischer is again in the news as he faces the nossibilitv of going to prison.

A Legend on the Road deals with Bobby before he had become a household name. A complete unknown he wasn't, not with six U.S. Championships to his credit - including a scintillating 11-0 in the 1963/64 affair -but U.S. chess players had never had a real opportunity to see him in action without traveling thousands of miles.

Their one chance to see Bobby up close was Fischer's 1964 exhibition tour. Following in the footsteps of such legends as Capablanca and Alekhine, Bobby barnstormed the U.S. and Canada from coast to coast. His entertaining lectures, high level of play and personable manner won many new admirers.

A Legend on the Road gives a comprehensive look at the tour with newspaper reports, magazine articles, personal reminiscences and lots of games, many of which have never been published before. This second edition features new material including a recently rediscovered exhibition in Indianapolis, first hand accounts from the San Francisco, Little Rock and Pittsburgh, several games, plus photos, artifacts as well as corrections. This book is a treasure trove for every Fischer fan.

005 Introduction to the Second Edition

007 Introduction to the First Edition