The store will not work correctly in the case when cookies are disabled.
Artikelnummer
LGBOZASOTBT
Autor
Richard Bozulich

A Survey of the Basic Tesujis 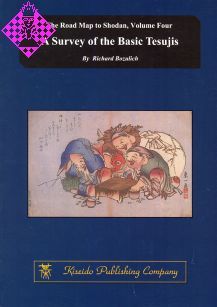 In life-and-death situations and during the sharp skinnishes that arise in the middle game, brute-force analysis is usually required. However, intuition also plays a role in your ability to instantly find the key move that tums the position in your favor. Those key moves are called tesujis. There

are about 45 different kinds oftesujis that a dan-ranked go player should be familiar with. If a player has solved many problems that involve a certain kind of tesuji, that player will immediately recognize - almost unconsciously - positions in their games where that tesuji is applicable. This is

called 'pattern recognition '. Of course the player must confinn that it is indeed the required tesuji by the brute-force reading out ofthe continuation after the tesuji is played.

The aim of this book is to make the high kyu-Ievel player aware ofthe various tesujis that can arise in their games. It presents more than 40 basic tesujis that arise in the game ofgo. After an example ofa tesuji is presented and explained, three to 12 problems follow, showing the various ways that they can be applied. In all there are 182 problems. If you are a high kyu-Ievel player, your intuition is probably poorly developed, so it will be hard to spot the correct tesuji, but you should not dwell too long on each problem. It is bctter to look at them as examples and make a best-guess move, then immediately look at the answer. In this way you canprobably do 20 problems in an hour and get through the entire book in about a week. As you are intemalizing this new knowledge, your intuition will be gradually developing. After finishing the entire book, go through it once more. You will have already absorbed the much ofthis new knowledge and you will recognize many pattems that keep reoccurring. After going through this book twice at high speed, you can then come back to it and look at the solutions in more detail and confinn the results. By studying the tesujis presented here in this way, your intuition will develop to the point that you will be able to spot similar tesujis in your games.

040 Wedging in with a Hane (Hanekomi)

156 Bumping against the Enemy's Stone