The store will not work correctly in the case when cookies are disabled.
Artikelnummer
LXPANAHM1955
Autor
Vijay D. Pandit 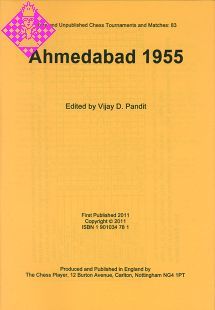 The Chess Player of Mr Gillam published my book "The Game of Chess (Western and Native Methods)" in October 2009.

Encouraged by his interest in chess activities in India, I suggested to him the publication of one more book, the games played at the Ahmedabad Invitation Tournament way back in 1955. To my delight, he readily agreed to this suggestion. I sincerely thank him for the same.

Though Westerners accept that the game of chess originated in India, they have always given a step-motherly treatment to the chess activities in that country. The ChessBase 2010 Database that boasts that it contains 4.5 million games does not include even a handful of games played in India prior to the emergence of Anand (none even of 660 off-hand games played by John Cochrane alone in Calcutta between 1848 and 1860) - not to mention it does not contain any game from Ahmedabad 1955!

I would be inclined to call it a success if the publication of the two books by Mr Gillam helps in improving this scenario in the West at least to certain extent.

Though I possessed scores of all 69 games, four of them were not clear and needed to be deciphered. Dr Ambar Chatterjee, a scientist from BARC (Bhabha Atomic Research Centre) and editor of The AICCF Bulletin for 10 years (1998-2008), was kind enough to help me in this regard. I take this opportunity to thank him for the same.