The store will not work correctly in the case when cookies are disabled.
Artikelnummer
SCOKASACFE
Autor
Rustam Kasimdzhanov 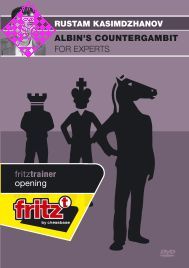 Many chessplayers consider Albin's Countergambit (1.d4 d5 2.c4 e5) nothing more than a relict of romantic chess, connecting with it - at most - the names of the old masters like Lasker, Aljechin, Janowski, Marshall and Keres. Even many tournament players don't really know much more about this opening than the following nice trap with the sub-promotion of a pawn into a knight: 1.d4 d5 2.c4 e5 3.dxe5 d4 4.e3 Bb4+ 5.Bd2 dxe3 6.Bxb4 exf2+ 7.Ke2 fxg1N+ with a winning position for Black. Fortunately enough, from time to time certain world-class players are willing to reconsider the old and connect it with new ideas. Thus Albin's Countergambit experienced a revival in 2004 when top-ten player Alexander Morozevich repeatedly employed in tournament practice - with success. Fascinated by the possibilities of this opening, also Kasimdzhanov followed Morozevichs example - and was successful too. Now Rustam Kasimdzhanov presents to you the experience made in top chess in the last years, in nearly 3.5 hours of video.