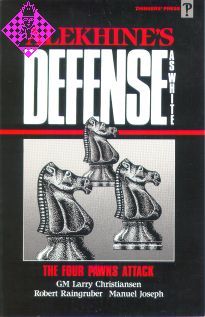 The final judgment of this variation has not been made but, Black has a rather narrow margin of safety in the best lines. White is out for blood!

This book offers White a complete method for handling Black's assault on the White center. Strongest play for White and Black is presented in the main reference lines. Significant alternatives for White, for those with different styles, are mentioned parenthetically and sometimes as problems, like the highly successful King's Gambit As White.

Of high interest are the lines concerning the Ljubojevic variation and the Queen's Knight variations. Transpositions, concepts and plans are strategically placed throughout this textbook on this hypermodern opening.

Solutions to all problems are given.

Larry Christiansen needs no introduction in the international chess arena. Twice co-champion of the United States, tied for first with World Champion Anatoly Karpov at Linares in 1981, and first or equal first in any number of American chess tournaments; Larry has firmly established himself as one of the very top U.S. chessplayers over the last decade.

In the context of this book, ALEKHINE'S DEFENSE AS WHITE The Four Pawns Attack, Larry has served eminently as both contributor and editor. Demanding Christiansen's attention especially were the Ljubojevic and Queen's Knight variations (chs. 4 and 6). Along the way, Larry's tactical acumen has rescued theory from the wolves on a number of occasions.