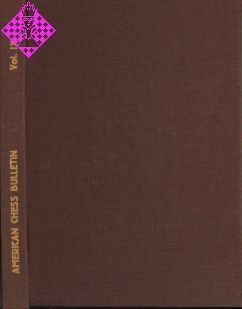 More collectable news and games from the turn-of-the-century New York magazine. In a timely reminder of difficulties regarding World Championship contests, we read of the drawn-out negotiations between Lasker and his new challengers, Capablanca and Rubinstein. Major events are, as usual, well documented: San Sebastian (won by Rubinstein), Breslau (Rubinstein again, this time with Duras) and Marshall-Janowski. Controversies of the day are regularly aired, including a piece entitled "Quit kicking my dawg around" in which Nimzowitsch offers to play Tarrasch for stakes with his "ugly" Philidor's defence, following derogatory comments by the Dr. from Nuremberg. An editorial rails against "The Evils of Adjournments". Another classic year from the vintage magazine.