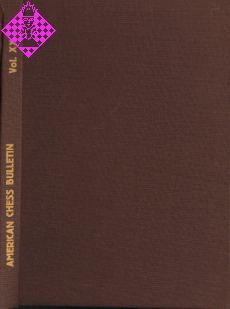 Frank Marshall defends his U.S. title for the first time in 14 years, winning narrowly 9.5 - 8.5 against Edward lasker. From overseas, news comes of Alekhine, who leads at Carlsbad, but loses to Spielmann in the penultimate round and is forced to share first. 208pp.