The store will not work correctly in the case when cookies are disabled.
Artikelnummer
LZACM1189798 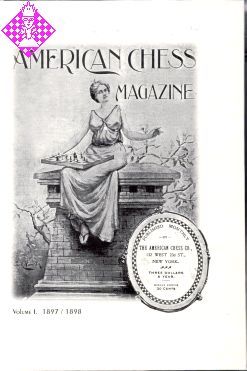 Three Volumes Magazine (Vol.I: 1897/98, Vol.II: 1898/99, Vol.III: 1899) which British Chess Magazine called at the time the best value for money ever seen. The prescient reviewer compared it to Brentano's Chess Monthly, another short-lived magazine of the time. Brooklyn Daily Eagle wrote one hundred years ago: "The American Chess Magazine, which made its debut last Saturday, reflects credit upon its compilers."

American Chess Magazine which started from June 1897 only lasted into 1899 before coming to an end. It certainly gave value for money, mixing much prose on club life and personalities with annotated games, problems, books reviews and many other items.

Volume I ran from the June 1897 issue to the April-May 1898 double number. Here you can find an early Napier-Marshall game in an Albin Counter Gambit. Marshall won, but the 16-year-old Napier was very successful at the time, beating Steinitz in one game and defeating many prominent New Yorkers. There are also games of Pillsbury and Showalter (they played two matches in the period covered by American Chess Magazine) as well as Charousek, Tarrasch and Chigorin. There is even a game by Franklin K. Young in a cable match against Britain. There are many information from different American local chess clubs, reports from the Berlin International Tournament, Llanduno Tournament, New York Sun Tournament, the Vienna Tournament and from many matches. All in all, a wonderful production that provides an insight into chess of a century ago.