The store will not work correctly in the case when cookies are disabled.
Artikelnummer
LXBENAG
Autor
Joel Benjamin 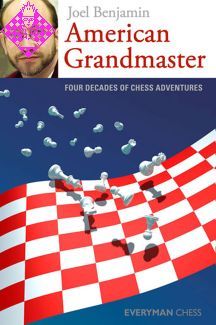 Joel Benjamin is one of the most prominent faces in the history of US chess. At thirteen years of age he broke Bobby Fischer’s record as the youngest ever national master, and this was followed by countless tournament successes. Perhaps most famously, in 1997 he hit the headlines when he became the chess consultant for IBM’s Deep Blue computer, which made history by beating World Champion Garry Kasparov in an epic encounter.

In American Grandmaster , Benjamin takes the reader on a journey through chess adventures spanning more than thirty years. Tracing through his own career, from being a prodigy in the ‘Fischer boom’ era thorough to an experienced Grandmaster with many titles, Benjamin is in a unique position to highlight the major changes that have occurred both in US and international chess throughout the last four decades.

Joel Benjamin is an American Grandmaster, a 3-time US Champion, 6-time member of the Olympiad team, and was a double gold medallist at the 1993 World Team Championship. In 2007 he plays in his 24th consecutive US Championship, an incredible record that will prove extremely difficult to beat.

Hi, my name is Joel. I'm a forty-three year-old Pisces. I like sports, crossword puz­zles, nature programs, and controlled mating attacks. Welcome to my story.

In the past, when this book was purely hypothetical, I thought a lot about what to include. The games tell much of the story; put in the context of the tourna­ments, they reveal not only my best accomplishments but also my ups and downs, my dreams fulfilled and my hopes dashed. I have sprinkled in a number of my favorite anecdotes (the ones I can tell in the name of decency) and capsule sum­maries of several of my colleagues. People and places made the games worth playing. I hope that I have conveyed the excitement, intensity, frustration, disap­pointment, and joy of being an American chess professional.

It gives me great pleasure (and hopefully some for the readers, too) to recount the "what it was like then", but the "what it is like now" impacts the future of chess in America. In the last section I have described various problems that con­front the current American chess scene. I don't claim to have easy solutions, but bringing the issues to the forefront may help us move in the right direction.

224 12 The World Championship is not Enough