How to crown positional play by tactics 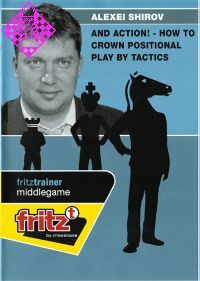 There are few names which, like that of Alexei Shirov, can be associated with fantastically imaginative and tactically influenced play. Now the Latvian grandmaster is presenting a DVD on precisely that element of the game of chess. And one that is completely based on his own games. The first series of examples deals with simple tactics, in which mate often has its part to play. In the passing you will learn a lot of details about Shirov’s career and also his evaluation of other players. By the second series it is not only tactics which are being discussed, but also attacking play in its entirety. Yet here too the author continues to offer you the opportunity to find for yourself a move or a short combination. In chapters 5 and 6 he demonstrates complex attacks. That is to a great extent the key discipline: tactics embedded in positional play or seen from the opposite point of view, positional play which includes tactical elements. So this DVD goes far beyond pure tactics and is perfectly suited to advanced players who wish to develop their understanding of the game. Video running time: 4 hours 52 min.