The store will not work correctly in the case when cookies are disabled.
Artikelnummer
SCBECATP
Autor
Karsten MüllerStefan Becker 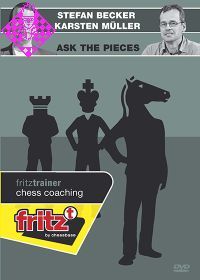 How should systematic chess coaching be structured so that students are able to use their freshly acquired knowledge in their own games? Author Stefan Becker came to an astonishingly simple answer. The solution to every chess problem lies on the board. So it’s quite logical that we should ask our pieces what they think about their future. But what do these discussions sound like, and what happens if the pieces have different or conflicting interests? This DVD provides the answers to these questions and more by working through a number of selected masterpieces. Suddenly it becomes clear how world-class players come up with their brilliant ideas.

Stefan Becker illustrates his concept, talking to the pieces, by taking the role of the player in a number of games. German Grandmaster Dr. Karsten Müller lends his voice to the pieces and tries to express their feelings, aims, plans, wishes and fears. Becker then demonstrates how this feedback, together with calculation and new questions, leads to the right decisions over the board. Becker’s didactic concept can also be used by teachers to explain the inner workings of chess to their students.

Stefan Becker is an experienced club and school chess coach. He coaches the upcoming talents of Turm Lüneburg (German third division) as well as the children joining the chess group from the

biggest secondary school in Lüneburg. He also instructs South African teachers in the methods of chess coaching on behalf of the German Chess Foundation. He is an experienced tournament player (Current Elo 2203) and, among other tournaments, won the German Junior Correspondence Championship.

The Grandmaster from Hamburg, Dr. Karsten Müller, has been playing in the top division of the Bundesliga for Hamburg Chess Club since 1988 and in 1996 and 1997 he came in third in the German

Championship. An internationally recognized endgame expert, he writes the Endgame Column for ChessBase Magazine and “Endgame Corner” on ChessCafe.com.