The store will not work correctly in the case when cookies are disabled.
Artikelnummer
SCODAVAWTMI
Autor
Nigel Davies

Attack with the Modern Italian 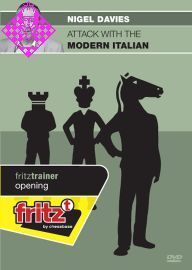 In recent years the Italian Game has undergone a renaissance, transforming it from the Cinderella of 1.e4 openings into a major system which offers excellent chances for White to gain the advantage. Accordingly it has found favour with some of the World`s top players including Garry Kasparov, Vladimir Kramnik, Sergei Tiviakov, Viktor Bologan, Sergei Movsesian, Michael Adams and Boris Gelfand. Unlike the Ruy Lopez, which features many sharp theoretical variations, the emphasis in the Italian Game is on knowing where the pieces belong and understanding key plans and ideas. This makes it highly suitable for players who do not have the time to engage in ongoing maintenance of their opening systems. On this DVD Davies examines the modern treatment of the Italian with 1.e4 e5 2.Nf3 Nc6 3.Bc4 followed by 4.d3 and then usually c3. He also places the onus on attacking lines for White, often featuring him castling queenside and then charging up the kingside. Not only do such variations score heavily in club chess, they are also a lot of fun to play!

Nigel Davies has been an International Grandmaster since 1993 and is a former British Open Quickplay and U21 Champion. Besides his playing accomplishments he is an experienced chess coach with an ability to explain chess ideas players of any level. He is an acknowledged expert on 1.g3 having played it on numerous occasions in his own games.