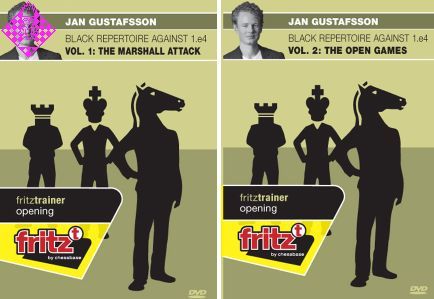 The Marshall Attack is one of the most dynamic replies Black has at his disposal against 1.e4. At the cost of a pawn, Black takes over the initiative from the get - go and goes after the white king. Wrongly considered to be mainly a drawing weapon by some, this DVD offers many new ideas for Black, showing how to keep the queens on the board and to play for a win in almost all cases. Unfortunately White is not obliged to enter the Marshall. This is part 1 of a twopart series that will provide the viewer with a complete repertoire against 1.e4. The disk deals with all white options after 1.e4 e5 2.Nf3 Nc6 3.Bb5 a6 4.Ba4 Nf6 5.0-0 Be7 6.Re1 b5 7.Bb3 0-0.

In 17 chapters with a total runtime of three hours and 45 minutes, all the subtleties of the Marshall and Anti-Marshall will be revealed.

The author is grandmaster Jan Gustafsson. Rated 2646, Jan is one of the leading German players and one of the world's biggest Marshall specialists.

The open games after 1.e4 e5 offer White a huge choice. Part 1 of this series covered the main line Spanish and recommended the Marshall Attack - but what to do against the Exchange Spanish, the Scotch or the Italian Game?

The DVD answers those questions and many more. Based on his own Black repertoire, GM Jan Gustafsson provides you with all the tools you could need to succesfully combat 1.e4 with 1...e5! Learn why 4...Nf6 spells trouble for Scotch enthusiasts, how to deal with the Evans Gambit and why the King's Gambit should be accepted. Popular lines like 5.d3 in the Spanish are covered, just like the Four Knights, the Ponziani or the Vienna Game, exotic lines like 1.e4 e5 2.Bc4 Nf6 3.d4 get their treatment as well. Many novelties and improvements over existing theory are to be found along the way. After watching this DVD you will no longer fear your opponent's deviations from a main line Spanish, in fact, you will positively hope for them! In 19 chapters with a running time of 5h 34, you can complete your e4 e5 repertoire.

The author is grandmaster Jan Gustafsson. Rated 2646, Jan is one of the leading German players and one of the world's biggest Marshall specialists.