The store will not work correctly in the case when cookies are disabled.
Artikelnummer
LXHEABCK
Autor
Eliot HearstJohn Knott 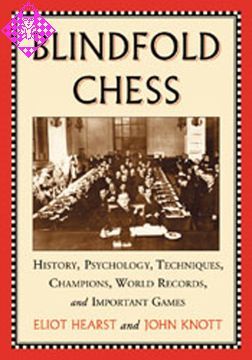 About the Book
For centuries, blindfold chess--the art of playing without sight of the board or pieces--has produced some of the greatest feats of human memory, progressing to the extent that the world record in 2009 was 45 [and is now 46] simultaneous blindfold games. This work describes the personalities and achievements of some of blindfold chess’s greatest players--including Philidor, Morphy, Blackburne, Zukertort, Pillsbury, Reti, Alekhine, Koltanowski, Najdorf and Fine, as well as present-day grandmasters such as Anand and Kramnik. Including some never before published, 444 games scores are presented, peppered with diagrams and annotations. Hints for playing blindfold, and its practical value, are also included.

About the Author
The United States Olympic Chess Team captain in 1962, Eliot Hearst is a U.S. Life Senior Master, a distinguished professor emeritus at Indiana University, and an adjunct professor of psychology at the University of Arizona.
John Knott has written numerous legal articles and is a consultant at the London head office of an international law firm. Each author has had a particular interest in blindfold chess and has studied the subject for more than thirty years. Visit their website at www.blindfoldchess.net .

"the authors are to be highly commended for their research...most comprehensive"--The Compulsive Reader

"this is not your typical chess book...an interesting and complex history...it’s not often that a chess book comes along that doesn’t more or less cover the same ground as countless books before it, but this is such a book. The authors combine intellectual curiosity, scientific investigation, and a love of chess to produce what truly can be called the magnum opus of blindfold chess"--ChessCafe.com