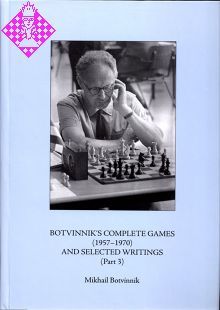 Mikhail Botvinnik's Analiticheskie i kriticheskie raboty [Analytical and critical works] were originally published in four volumes between 1984 and 1987. The first three volumes covered his best games, and an English translation of these has already been published by Moravian Chess (Botvinnik's Best Games Volumes 1, 2 and 3 ).

The fourth volume contained the author's collected writings, and for the present English publieation this material has been divided among three books, of which this is the third and last. These books also include all Botvinnik's known games (apart from the 381 already published in the Best Games series), with annotations by Botvinnik where available.

The resulting six-volume series therefore presents a complete collection of Botvinnik's own game annotations and the best of his chess writings.

Botvinnik's own foreword to the fourth Russian volume can be found in the previous book in this series Botvinnik's Complete Games (1924-1941) and Selected Writings (Part I).

I should like once again to mention the important role played in the compilation of this series by Mikhail Botvinnik's nephew Igor Botvinnik, who sadly died just before the publication of the previous volume.

053 The match that did not take place

117 Defence of the title

142 An algorithm for chess