The store will not work correctly in the case when cookies are disabled.
Artikelnummer
LEMATPE
Autor
Alexander Matanovic 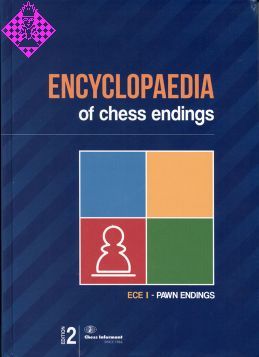 At the beginning of the 1980s, the Chess Informant publishing house started one of the greatest publishing ventures in chess history. In 1982 the first volume of Encyclopedia of Chess endgames was published (Pawn endgames). Another 4 volumes swiftly follows, in total containing over 9.000 endgame examples! This is the most comprehensive reference work on the endgame and, of course, it's no coincidence that EVERY new book on the endgame refers to it. The names of the contributors speak about the quality of this edition: including WCCs Botvinnik, Karpov and Kasparov ...

The first edition of Pawn endgames was sold out relatively quickly (10.000 copies!) and since then readers have not been able to get this important edition. Chess Informant publishing house has decided to cheer up its readers: The second revised edition of PAWN ENDGAMES is finally published!

The contributors of the first edition were: (editorial board) GM Aleksandar Matanovic and a large number of eminent contributors: multiple WCC and expert in the endgame Botvinnik Mikail, expert in the endgame Averbakh Yuri, Huebner Robert, Hort Vlastimil, Miles Anthony, Minev Nikola, Parma Bruno, Uhlmann Wolfgang and Unzicker Wolfgang. These names alone are sufficient to assess the true value of this book.

The second edition is not only reprinted but has been considerably revised: about 300 examples have been added from modern practice. Also, some examples that contained errors or omissions have been corrected.

Because of its simplicity and systematic approach the book is useful for advanced players and for those who want to become familiar with the basics of endgames. It's especially interesting for coaches.