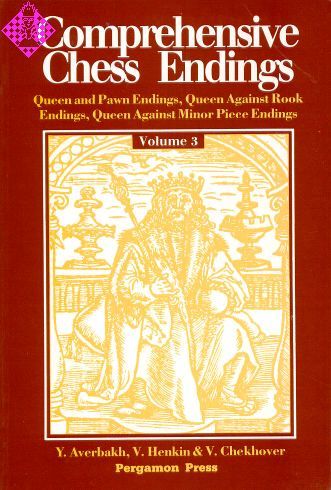 The first Russian edition of this series (1956-62) established the editor, Soviet grandmaster Yuri Averbakh, as one of the greatest world authorities on endgame theory. Comprehensive Chess Endings is a translation, in algebraic notation, of the second Russian edition, which has been considerably revised and enlarged. It is being published in five volumes, each volume being designed to be used either as a textbook or as a reference work for the analysis of adjourned games.

The present volume is in three sections: Queen And Pawn Endings (Yuri Averbakh), Queen Against Rook Endings (Victor Henkin) and Queen Against Minor Piece Endings (Yuri Averbakh and Vitaly Chekhover). In each section the aim has been to give an exhaustive coverage of basic positions with a small number of pawns, and to show the typical ideas in more complicated positions with a larger number of pawns.