Art Of Winning with the Isolated Pawn in ... 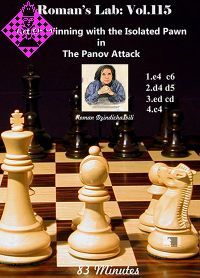 The Panov Attack is one of the most important opening positions in chess to learn. It is rich with positional play, building attacks, maneuvers tactics and much more. On this DVD Roman will explain the art of playing with an isolated pawn by mastering this art you will learn the science of chess and become a better chess player. The Panov is a must to master because it can transposes from several different openings including The Caro-, Grunfeld, Tarrasch, Nimzo Indian, Center Counter, and Accelerated Dragon. Roman will increase your understanding of playing and winning with the isolated pawn positions that arises in the Panov Attack