The store will not work correctly in the case when cookies are disabled.
Artikelnummer
SROMARTCS02
Autor
Andrew Martin

for the Tournament Player 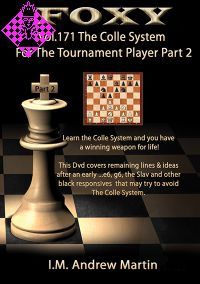 In these days of databases, computer analysis and the constant use of chess engines, is there room for an old-fashioned opening like the Colle System ?

Using mostly modern games, with a few classics thrown in, Martin demonstrates that even very strong players underestimate the Colle, do not study the subtleties of the opening and can end up losing horribly.

Part 2 tidies up remaining ideas after an early ...e6 and covers lines where Black avoids ...e6 until he has developed his Bishop on c8