Repertoire for Black based on the Lasker Variation 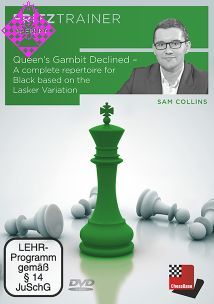 The Queen’s Gambit Declined (“QGD”) has arguably been the most important opening in World Championship matches and elite tournaments for over a century. On this DVD, Sam Collins presents a repertoire for Black based on the rock-solid Lasker variation, reinvigorated with new ideas by former World Champion Vishy Anand and forming the cornerstone of many strong GM repertoires today. With the exception of the Catalan, all the significant variations after 1.d4 d5 2.c4 e6 are covered, including White’s deviations with Bxf6 and Bf4, and the critical Exchange Variation. Recent attempts by White to launch a kingside pawn storm with g4 and h4 have also been covered in detail. No other opening can boast a better pedigree than the QGD, having been contested by World Champions with both colours. In going through the material, in addition to learning an opening against 1.d4 which can be played for life, the viewer will also become closely acquainted with a large number of the most important grandmaster games of recent years.

Sam Collins is an International Master from Ireland. He has two GM norms and has been national champion of Ireland and Japan. He has represented Ireland in eight Olympiads, winning a gold medal in Bled 2002. He has also produced several bestselling DVDs for Chessbase.