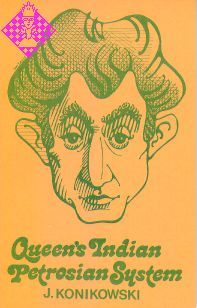 The serious chess player will find that this book is a real feast of analysis on one of the more popular opening variations in modern tournament practice. Konikowski follows his earlier success with his Tartakower System, Queen's Gambit with even greater in-depth analysis, coupled with well-selected illustrative games from current praxis. Generous use of diagrams and clear presentation aid the reader in his study of this important line.

The Queen's Indian Defense currently enjoys an immense popularity in tournament practice. Its historical origin can be traced to the great 1914 international tournament in Petersburg, where Nimzovich successfully employed a novel idea against Bernstein. It involved the development of the light-squared bishop to the long diagonal a8-h1, thus increasing pressure on the central points d5 and e4. This interesting plan of development soon found its way into the repertoire of such great masters as Alekhine, Euwe, Botvinnik, Bogolyubov, and, naturally, its originator, Nimzovich.

This defense found its proper place among the Indian-type systems of the modern era, and presently it is adopted by many of the world's leading players. The defense was enriched by important contributions from such well-known grandmasters as Smyslov, Petrosian, Spassky, Keres, Portisch, Huebner, Larsen, Timman, and Miles.

The Queen's Indian Defense has also become the defensive weapon of the present world champion, Anatoly Karpov, who not only scored with it many important victories, but also introduced many interesting ideas.

Petrosian's System in the QID

White avoids the Nimzo-lndian Defense, which may result after 3 Nc3 Bb4, instead striving for a more rapid development of his kingside. In addition, the Nb1 will often find a more favorable post on d2.

3 ... b6 In contradistinction to the King's Indian Defense, where Black develops the bishop to the a1-h8 diagonal, here Black increases pressure on the light-squared long diagonal and attacks the enemy kingside. In many instances the direct action of Bb7 will enable Black to launch the decisive assault on the White king.

The alternate 4 g3, where White attempts to neutralize Bb7 by fianchettoing his own bishop, has indeed found many followers. The text was pioneered in the game Petrosian-Szabo at the Portoroz Interzonal in 1958. Its idea is based on Nimzovich's axiom that this type of a pawn move does not lose a tempo because it affects the struggle for central control.

Petrosian's system has come into its own only recently. It has been successfully deployed by Portisch, Timman, Hort, Polugaevsky, Miles, Browne, Vaganian, Gheorghiu and many others. However, it became particularly popular through its use by Kasparov, who revived it with his uncommon ingenuity and many dynamic ideas.

Petrosian's System has a diverse character in the strategic sense. The course of the game can follow the classical outlines of the Queen's Indian Defense as well as divert to positions which are characteristic of the Queen's Gambit or the Modern Benoni Defense. And this provides for a wide selection of plans for both sides.