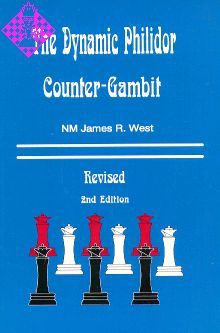 "The idea of this defence, introduced by Philidor (1749)," wrote Freeborough and Ranken, "is to protect the advanced king's pawn from the adverse knight before proceeding with Greco's Counter-Gambit, P-KB4." From February 1990 through the time of this writing in June 1996, I have essayed the Philidor Counter-Gambit on one-hundred-and-thirty-five occasions. My record stands at seventy-two wins, thirty-six losses, and twenty-seven draws. In other words, I win with it more than half the time and lose with it less than one-third of the time. Not bad for a defensive system that has four supposed refutations!

Actually, I played the PCG on one earlier occasion in the 1970's. Even though I won that encounter (see Supplemental Game #12), I gave up the variation for many years because the conventional wisdom has always been that the line isn't any good. During those years, playing correct chess was the most important consideration for me. Why should I play the PCG, which has an unsound reputation, when I could play the Sicilian Defense, an opening that has never been refuted?

Lately, I have experienced a change of heart. Where it once seemed madness to play into the unclear complexities of the PCG, it now seems foolhardy to play the Sicilian Defense, when even Class C players know the first fifteen moves from memory. One advantage I have found to playing the PCG is that it forces my opponent to think for himself and make his own mistakes, rather than get a free ride from some grandmaster's published analysis. I recall how, in that February 1990 game (see Supplemental Game #4), my opponent (a master) spent one full hour on his fourth move!

Despite my many over-the-board successes, my proudest moments occurred when I observed other players (including an expert whom I have beaten four times with the PCG) adopting the defense themselves as Black. Perhaps, as a result of this book, the Philidor Counter-Gambit will be seen more frequently at chess tournaments.