The store will not work correctly in the case when cookies are disabled.
Artikelnummer
LOCORTCK
Autor
Matthieu CornetteFabien Libiszewski 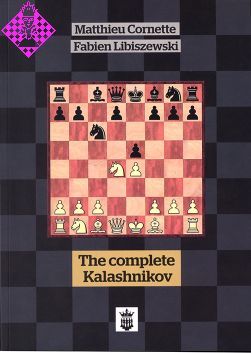 Chess-Evolution is a relatively new name among chess publishers, but they have already shown their intentions: becoming one of the main publishers in chess. There are already some interesting titles with the Chess-Evolution emblem and I’m sure many more are planned.

The authors are Grandmasters from French and newcomers to the world of chess literature. For their first work they choose the very ambitious “Sicilian Kalashnikov” which is sometimes considered an improved “Sicilian Sveshnikov”, because even the godfather of the Sveshnikov abandoned his own child and prefers the Kalashnikov variation.

The Kalashnikov variation of the Sicilian Defence arises after the following initial moves:

Black’s play is very ambitious, by creating a whole on d5 he tries to keep a firm central control by playing ... e7-e5, hitting the knight and later try to undermine white’s central influence by means of ... f7-f5. The positions arising are very sharp and very complex, even for some experts in that line. Let me show you, whether the analysis provided in this book is sufficient to give you a good start with this opening.

Unfortunately both authors do not mention precisely for whom this book is written. After going through this book it seems to me, as if the aim was to satisfy players rated around 2000, who already know certain things about strategic play, the use of the initiative and a feeling for dynamic positions. Black has to be careful when choosing the Kalashnikov variation (or the Sicilian Defence as a whole) and with the lines given in this book he’ll certainly avoid being crushed in the main lines.

As written in the preface, the GM’s intended to write a book only from Black’s perspective but they switched plans and provided coverage for both, White and Black. They tried to cover many options from both sides and be as objective as one can be, not being biased by their initial intentions.

The book is structured as follows:

After which the authors give a choice for Black

Lines C and D are covered under the Index [B33] usually related with the Sveshnikov variation, and indeed if Black wants to play the Kalashnikov he has to be prepared to face some minor lines from white’s side. And that’s the point where we steer into Sveshnikov territory. But don’t be afraid: These lines are not considered critical and the authors do a great job in showing the path for black which provides him with good counter chances.

There are many pro’s regarding this book but also some serious con’s. I liked very much that Black gets a choice which line to play and thus has certain flexibility while playing according to Cornette and Libiszweski. This will give you a certain space to vary when preparing for competitive play. Also the analysis provided within these pages is very good and probably top notch. It’s accompanied with verbal explanations showing strategic aims and ideas which are important for those who drop out of book.

But there are also some drawbacks which I have to highlight, unfortunately. First of all it’s a book which lays the ground, the fundament for further study on the subject but will certainly need further investigations before the reader is able to play it completely, knowing all the nuances. The only other drawback I could see is the layout of the book. This is the first book by Chess-Evolution I review so I can’t draw parallels to other books but it’s a bit messy. Many lines and especially sub-variations are not well structured and marked. There is no clear sign that a new line starts or that a new sub-sub-variations begins which makes it hard to follow the course of a certain variation over several pages. It’s a bit difficult to follow and study this book that way and it’s maybe the main drawback I would associate with this book.

Certainly the most recent book on the Kalashnikov so far. The analysis contains material from recent year and shows the current development of this line. I expect that many games will be played over the next couple of years since many players turn away from the Sveshnikov and switch to the Kalashnikov instead. With this book, you’ll therefore have the best possible start to this opening, based with cutting-edge theory. There are some drawbacks which Chess-Evolution has to get rid of, despite being a relatively new publisher. There’s some room for improvement and they need to do it in order to rise to the Olympus of publishers in chess and especially to attract more readers.