The store will not work correctly in the case when cookies are disabled.
Artikelnummer
LGBOZGSAJ3/GS04
Autor
Richard BozulichFuruyama Kazunari

Get Strong at Joseki 3 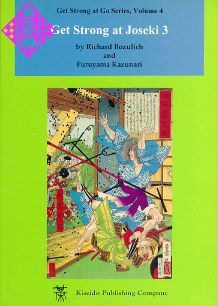 Most books on joseki list endless variations, leaving it up to the readers to fend for themselves in applying these josekis to their games. This joseki book is unique; not only does it show you the most important star-point and 3-3 point josekis that are likely to arise in your games, it also shows you how to apply them in actual situations, which joseki to select, and how to continue the joseki in the middle game. It also contains many new josekis that have appeared in professional games over the last 15 years, making it the most up-to-date joseki book available.

The material is presented as a series of problems. This format is an ideal way to study joseki. Instead of memorizing variations, your attention is focused on an important joseki move or idea. Memorization then comes effortlessly, making this the perfect joseki book for all players.

Get strong at Joseki 3 is the third of a three-volume series on joseki. Since it deals mainly with josekis that arise from the star point in even games, it is probably the most relevant book in helping you understand modern professional games, since star-point josekis are the most-often played nowadays.

Studying josekis is an excellent way to increase your go strength. Josekis contain countless examples of tesujis, of making good shape, and of good style. However, studying josekis does not mean memorizing them; rather, you should approach the study of josekis to gain an appreciation of the good moves they contain, in the same way you would study the games of master players. You may not immediately understand why a joseki move is good, but then you will see the same kind of move played in another context. Slowly you will begin to gain an appreciation and an understanding of these moves. Eventually, you will find yourself making these moves instinctively.

If you are a not-so-strong kyu player, the level of difficulty should not deter you from studying the material in this book. The problems are interesting, and what you will gain in your first reading is exposure to a lot of interesting problems and the ideas contained in them. Exposure is an important part of any learning process.

This book is divided into four parts. The first part is a quick, superficial survey of the basic star-point and 3-3 point josekis. But the meat of the book is in the three problem sections. Part One contains 116 problems on variations of the josekis in the Introduction. This part is intended to flesh out the introductory survey and to prepare the reader for the second part. You should approach these problems as if you were faced with the situation in an actual game.

Part Two contains 25 problems on choosing the right joseki in the context of a fuseki position. This is an important topic that is ignored in most joseki books. In some of the problems in this section, the answers cannot be found in the josekis in the first part; you are required to come up with an inovative move.

In Part Three you will find 44 problems on how to play after the joseki is finished. This is another topic that receives scant attention in joseki books.

Most of the problems in this book are part of a series of problems in which various lines are explored. The answers are usually short, avoiding long, drawn-out variations. In this way the reader can concentrate on the important ideas of the joseki being studied.

The reader is not necessarily expected to solve these problems; rather he or she is expected to look at each problem, think about it carefully, come up with an answer, then compare his or her answer with the one given. If you go through the whole book in this way, by the end you will have developed your judgment and intuition so that you can handle yourself confidently in

actual play with the josekis we have discussed.

Finally, I would like to thank Furuyama Kazunari, a former Nihon Ki-in insei, who helped me write this book by selecting all the problems and providing the explanations.