The store will not work correctly in the case when cookies are disabled.
Artikelnummer
LGAOKGGPFDP2
Autor
Masaru AokiHirokazu Sato 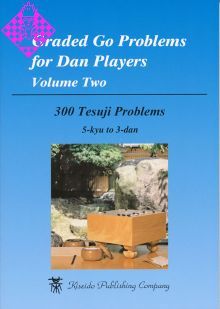 When you get into a fight, knowledge or ignorance of the right tesuji will make you or break you.

The biggest difference between kyu players and dan players is fighting ability. Perhaps the most important element in fighting is good judgment in choosing the timing and the objectives of the fight. However, good judgment is worth nothing without the fighting abil­ity to back it up, and the most important component in fighting abil­ity is the knowledge and skillful deployment of tesujis. This applies to all stages of the game, from the opening to the endgame. Josekis are at heart collections of tesujis and a one-point gain earned by an endgame tesuji may turn the result of a game around.

This book, which is a translation of two popular Nihon Ki-in collections for aspiring 1-dans and 3-dans, is a systematic compila­tion of the basic fighting tesujis that every dan player needs to know. Very few players, even those already of high-dan level, will have mastered all the tesujis presented here. Not only will careful study of these tesujis enable you to execute your fighting plans better, it will also broaden your tactical horizons by revealing to you new possibilities in the fighting and effectively deepen your understanding of go.

Book One: 5-kyu to 1-dan Problems 002 Chapter One: Tesujis that Appear in Josekis