Rate yourself and learn how to improve!
Eigenschaften
Vergriffen 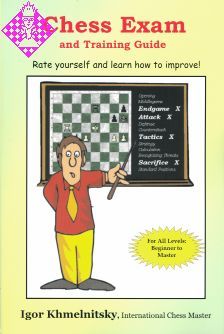 "Book of the Year"

What is Your Chess Rating? Take this Comprehensive Self-Evaluation!

Would you like to know how good you really are at chess? Whether you are a beginner or a seasoned master, this book will help you to evaluate your current level, identify your weaknesses and get training advice.

"A comprehensive exam that will quickly and accurately test your combinational ability, your positional judgment and endgame expertise.. .Instructive and entertaining!" - Alex Yermolinsky, Grandmaster, former US champion and member of US Olympic team

"This book will prove helpful for students and teachers who want to get an objective idea of their strengths and weaknesses and how to correct them... it is very easy to understand and the didactic style shows through" - John Donaldson, International Master, director of Mechanics' Institute Chess Club

"This book clearly shows what parts of the game you may want to improve and then tells you how to do that. I recommend this book to all my students!" - Jaan Ehlvest, Grandmaster, former World Championship candidate, president of Ehlvest Chess-Gates LLC

"The training ideas and book recommendations are right on the money!" - Alex Shabalov, Grandmaster, 3-times US Champion

021 Final Comments: How to Take the Exam

244 Instructions: How to use the Tables

257 Attack: Find Your Targets and Shoot

281 Tactics: Exciting Explosions on the Chessboard

297 Sacrifice: Check is the Only Threat You can't Ignore

302 Recognizing Threats: Be on the Alert!

307 Analyzing Your Own Games

311 Afterword: What is the Next Step?

316 Appendix 2: Index of Players and Composers

2004 Book of the Year finalist (readers of ChessCafe.com)

“ ... I am happy to add my endorsement ... there is a huge demand for this type of thing and Khmelnitsky meets it much better than most” - Jonathan Rowson , NIC

“If you are in the under-2200 category and would like to know how to economize your limited training time, then Chess Exam is for you. It’s simply one of the best instructional books I’ve read in years. It’s a labor of love, so don’t let this one pass you by.” Baldomero Garcia , ChessCafe.com

Everyone thinks reviewing chess books is easy, but it's not! About every two weeks Alex sends me a couple of new books. If I could read and understand all this material, I would be writing for Chess Today instead of reviewing books.

When I received Chess Exam my first thought was, "Oh no, another combination book!" But I was pleasantly surprised in reading through this book. It is as close to receiving personal coaching in text form that I have experienced for quite some time, and I highly recommend it.

The meat of the book consists of 10 tests of 10 questions each. Each question is divided into two parts. In the first part the reader is asked the seemingly simple question of "who stands better?", and in the second part the reader is given four moves to choose from. Each question has 10 points (5 points for each part) awarded for the correct answer with partial points (and even negative points to help penalize guessing) given for the other choices. The positions vary from easy to difficult as well as covering all stages of the game from opening to ending. What's more, not all positions are the typical "find the winning move" concept, but they also involve more realistic game situations.

What separates this book from other puzzle/problem books is the author's detailed method on how the reader scores his points. The book applies a statistical approach to its conclusions to help the reader better assess his strengths or weaknesses. The point totals for each individual answer are broken down into percentiles of correct answers according to rating classes. But even more useful is that the sum of all 100 exams is broken down into twelve different characteristics, which allow the student (or teacher) to better evaluate the areas of strength and weakness for each player. These characteristics include: attack, counter-attack, defence, tactics, strategy, and calculations to name a few of the major concepts. Clearly a lot of thought and practical application has been given to the selection of each quiz, allowing for a detailed analysis of the solutions into the various subgroups. In taking a few of the tests, I felt that the breakdowns were very accurate.

Finally, after the 100 quizzes, the author provides a short teaching guide to each of these twelve concepts. He includes a nice explanation and an example of the discussed theme. Also each section comes with a few reading suggestions to further develop the theme. The recommended reading list covers most major classics but tends to be geared toward newer releases.

I really enjoyed this book. The author used a more scientific and detailed approach to test and evaluate the chess student than most of the other quiz books. The examples were well chosen and covered all aspects of the game. Furthermore, there seemed to be the feeling of sitting next to a trainer instead of just reading a staid textbook. The book that I would most compare this one to, is Lev Alburt's excellent, Chess Training Pocket Book which is another outstanding training manual.

Conclusion: I highly recommend Chess Exam for players in the 1600 - 2000 rating range and for trainers of students as well. The examples are well thought out, cover a wide range of concepts and are realistic in their application.

The last several years have seen a flood of 'test yourself' chess books. Most consist of a series of problems, one keeps score, and then at the end, one gets a 'rating'. Some seem accurate, some not, but when you are done, that is pretty much it. Khmelnitsky takes on a broader task - he not professes to assess your strength by rating, but also to pinpoint areas that need work, such as strategy, tactics, endgames, opening, etc.

The question is, does it work? In a word, yes.

Khmelnitsky is yet another trainer from the Ukraine and is 'only' an IM. So is Mark Dvoretsky. There is a school of thought that says people like them have spent more time learning how to teach than how to play. At any rate, he has a very nice website at www.iamcoach.com where you can read more about him.

The book is based on his long career as a trainer, with 'special problems'. Like most books of this ilk, it starts with a series of puzzles for the reader to solve. There are 100 total in 10 chapters. In a very nice layout decision, each puzzle is on the right hand page, with the solution on the overleaf. Included with the solution is an explanation of the correct answers, and why, along with a table showing how people of various classes of strength have answered the questions - e.g., what percentage of GMs, Experts, A players etc. answered A, B, C, D.

Each problem has two questions, usually an overall assessment of the position - White is winning, White is better, Black is better - and the second question is what is the best move, giving four possibilities. Now, multiple choice questions have definite drawbacks, but some of that is addressed by penalties for really bad choices, and the use of multiple choice is what allows Khmelnitsky to give those percentages, and what allows him to proceed to the second part of the book, the scoring.

Again, like most books, one ends up with a raw score. The 100 problems are each worth 10 points, each of the two questions are worth 5 points, giving a total of 1000 points, so one's score is easily expressed as a percentage, and one can calculate one's rating. So far, so unremarkable.

But, here is the kicker - there are 12 categories of scoring. There is a second set of tables one uses to rate their performance in each of these 12 categories. Each of the 100 problems is classified in one to three categories. For instance, the score achieved in an endgame problem would count towards endings, but it also may count towards calculation, sacrifice, attack, etc., depending on what the problem required for solution. There is a worksheet where one fills in the blanks with his score for each problem, and then adds up his score in the twelve categories. You again receive a 'rating' for each category, but more importantly, you see where you are weakest, strongest, in the middle, and how you performed against others of different strengths.

This strikes me as a quite useful exercise. For it to have any value, the test must have been given to enough people to form a useful database of measurement, and according to Khmelnitsky, he has given it to hundreds of players over his twenty year coaching career.

In my case, it confirmed some of what I knew, and surprised me with other takes on my play. I have been playing tournament chess for over forty years. I have always been a very tactical player, considered myself good at tactics and calculation, and strong in the endgame. My current USCF is 1977, down from 2198; my FIDE 2188, down from 2222. Some of the drop is age, and the difference between USCF and FIDE is mostly due to time controls - I play better at slower controls.

According to the book, I am 2150. Certainly in the ballpark. More interesting is that I scored over 2300 at attack and sacrifice, but only 1950 at calculation. This surprised me, and tells me I need to work at that. I also scored lower in strategy and openings, which I expected, but really low at counter-attack (!) which I certainly didn't expect. I did well in recognizing threats - but that is somewhat tactical. Oh, yeah, I almost broke the scale in endings and 'standard positions' which is a subset of endgame knowledge.

The book concludes with about fifty pages of training tips. It mostly consists of a description of the area of knowledge, ways to work on improvement, and recommendations for further reading and work. There is nothing really deep or earth shattering here, and I heartily agree with the works he is recommending - mostly classics such as My System, Zurich 1953 and the best of modern work such as books by Dvoretsky, Fundamental Chess Endings and the like. He also recommends playing positions against the computer, and technique I have only recently tumbled to. Finally, he of course recommends personal training, and offers to fill that void through courses on his website. In the overall context, this is not offensive in the least, and after going through the book, I am

tempted to take him up on that.

I would be remiss if I did not mention that at the end of each chapter of problems, there is a 'take a break' problem which is more of a humorous logical exercise rather than a real chess puzzle. It neatly serves the purpose of giving you a 'break' and then you can score the prior ten puzzles and see how you are doing.

In terms of time, I found that I was able to go through each section in 30 - 40 minutes, and spent a total of maybe six hours doing the exercises.

Conclusion: This book seems very well researched, and delivers on its promise. It will do a good job of judging your chess strength, and more importantly, pinpoint areas where you need improvement.

"Book of the Year"