The store will not work correctly in the case when cookies are disabled.
Artikelnummer
LXDVOSOCRET
Autor
Mark DworetskiArtur Jussupow 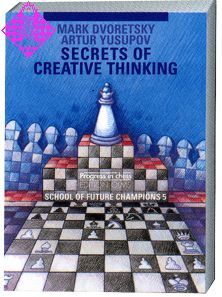 You now have in your hands the con­cluding, fifth book in the series School of Future Champions, based on material from the Dvoretsky-Yusupov school for talented young chess players.

Our small school functioned for only three years (1990-1992). Between ten and fifteen youngsters attended the sessions. Nearly all of them began studying with us at the age of 12-15. I can mention with pride that five years later eight of our pupils became grandmasters - some of them very strong and world-renowned. Here are their names: Alexey Alexandrov, Vasily Emelin, Inna Gaponenko, llakha Kadymova, Sergey Movsesian, Ella Pitem, Peter Svidler and Vadim Zviagintsev. I am sure that in the near future Vladimir Baklan and Peter Kiriakov will also become grandmasters. (They have! -Trans­lator.) Hardly any other junior chess school can boast of such a high 'pass rate'.

In listing the achievements of the school, I nevertheless clearly realise that the pupils' successes have been forged mainly by the players themselves and their permanent trainers. For example, did we have time to teach much to the future three-times Rus­sian champion Peter Svidler during those three ten-day sessions of the school (the 2nd, 4th and 6th) in which he participated? Of course, the main components of Svidler's successes are his enormous talent and the aid of his splendid trainer Andrey Lukin.

Yusupov and I saw our role as being to give an impetus to the further development of the young players. To help them to understand themselves, their virtues and deficiencies, and to outline plans for the future. To discuss the problems they encounter in chess and the ways to overcome them. To demonstrate the main directions and meth­ods of chess improvement. And that is all. Not so much, but also not so little. The pupils' results confirm that this was the correct approach and that on the whole we solved our objective successfully. Inciden­tally, it was at a session of the school that I advised Peter Svidler to seek Lukin's help.

Our books reflect the same approach. We have not tried to write textbooks, with a full and exact coverage of a particular topic. The aim was to provide readers with high-quality material and a variety of ideas for independent thinking and independent work in the given direction. Moreover, not only our own ideas, but also the ideas of other experts (in particular, trainers working to­gether with us at the school). Clearly, such a way of presenting the material demands of the readers a creative (and at times critical) attitude to the text being studied and is not suitable for those who like ready-made prescriptions. To judge by the popularity of our books, such an approach suits very many players.

Not all the problems discussed in this book are purely chess problems - they lie some­where between chess and psychology. Thinking at the board and the ways of taking decisions in a variety of situations - this, in brief, is its main content. Many of the examples offered are very complicated and not straightforward, and demand a deep penetration into the position, ingenuity, and bold, risky actions. Therefore, compared with the preceding volumes, the present book is less instructional and more problem­atic and creative.

The arrangement of the lectures and arti­cles in the different parts of the book is to some extent arbitrary, since their topics are closely interconnected. For example, the discussion of the accurate and deep calcu­lation of variations in the first part of the book is merely a prelude, and it will be continued right to the end of the book.

The calculation of variations is not every­thing - during the course of a game a player is obliged not only to calculate, but also to guess. The problem of developing intuition has hardly been discussed seriously in chess literature. I am not a professional psychologist and do not claim to have written anything scientific, but I hope that my practical ideas and recommendations on this will prove useful to the readers.

Many players make the serious mistake of devoting all their free time exclusively to the study of opening theory. After all, errors made in the later stages of play have as much influence on results as poor initial organisation of the game. Specific playing deficiencies which, given desire and persist­ence can and should be eliminated, are typical of players of any standard. In order to emphasise this idea, the book critically analyses the play not only of young masters and candidate masters, but also of such top-class grandmasters as Artur Yusupov (he does this himself in the chapter 'Missed brilliancy prizes') and Garry Kasparov.

Opening theory develops very rapidly and therefore opening books are sometimes out-of-date even before they are published, whereas successful observations and con­clusions relating to chess playing in general retain their value for many years. The reader will be able to see this for himself by reading two articles by the Soviet master Beniamin Blumenfeld, a subtle analyst of chess psy­chology, which were written several decades ago. Don't be put off by his writing style, which is somewhat archaic by present-day standards - it is the author's thoughts that are most important, and they are still modern.

One of my earlier books School of Chess Excellence 2 - Tactical Play was devoted to problems of attack and defence. But these topics are inexhaustible and I hope that the fresh material analysed here in appropriate chapters will be useful to you.

In the traditional concluding chapter Yusupov analyses some games by pupils from the school. In previous books he mainly fo­cused on instructive mistakes, but this time the grandmaster decided to demonstrate some creative achievements by the juniors. The book concludes with a brilliant game by Vadim Zviagintsev, which the experts judged to be the best of all those published in Informator No.62. It is extremely rare for young players to have such an honour conferred on them, since the opinions of the jury members are strongly influenced by names and titles. I wish our readers the same competitive and creative successes as those achieved by our best pupils. I hope that you will be helped by the ideas derived from the books in the series School of Future Champions.

008 The Technique of searching for and taking Decisions (Mark Dvoretsky)

030 Wandering through the Labyrinth (Mikhail Krasenkow)

035 Visual Imagination and the Calculation of Variations (Benjamin Blumenfeld)

PART III PRACTICAL EXPEDIENCY IN THE TAKING OF DECISIONS

085 Does it pay to sharpen the Play? (Vladimir Vulfson)

098 Thoughts about a Book (Mark Dvoretsky)

153 Practical Exercises in the Taking of difficult Decisions (Igor Belov)

177 What lies behind a Mistake (Mark Dvoretsky)

191 Creative Achievements of Pupils from the School (Artur Yusupov)

204 Index of Players and Analysts

This final volume of the series "School of future champions" holds several techniques of creative thinking and is connected with the following chapters:

Part I The calculation of variations

Part III Practical expediency in the taking of decisions

Part VI Analysis of a game.

This game is good for ten pages of higly instructive text!

The whole game is unbelievable well analysed but I also love Dvoretsky's sum up words of this game: "Let us sum up. In playing for a win both players willingly took great risks. From the opening white did not gain any advantage, but black's dubious castling on the 18th move put him in an extremely dangerous position. He committed another error by being tempted by the spectacular 24 ... b3?! Instead of retaining the balance with 24 ... Qc4!, Sanakoev also went wrong twice: on the 21st move he did not choose the strongest plan of attack, and on the 25th he played too straight-forwardly for white, missing a quiet way of refuting his opponent's idea. Later black defended accurately and at no point he let his advantage slip. On the whole, the quality of the play {taking into account the irrational nature of the very sharp situation which arose in the game}can be assessed as very high.

But Dvoretsky gives move 24 ... b3?! and writes: "It was only when the present edition was being prepared for publication that I discovered both the refution of Maeder's idea, and the defence improvement 24 ... .Qc4!.

Altogether I found 6 high class correspondence games in this book from Dvoretsky & Yusopov.

Amusing are the words from Beniamin Blumenfield who describes in a classic article, "Practical chances in a chess game", where I found the two brilliant wins from Nimzowitsch, Kmoch - Nimzowitsch and Nimzowitsch - Euwe.

Interesting are the words from Blumenfield on this game: "Some would say that Nimzowitsch did not deserve to win. I cannot agree with this. Even the strongest master cannot take everything into account and do sometimes he ends up in an inferior or even lost position, not only against an equal opponent but also against a weaker one."

Conclusion: These works from Dvoretsky & Yusupov are unbelievable instructive!