Attacking the King in the Center 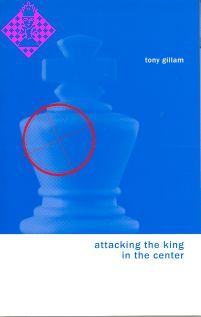 Your opponent's King is more vulnerable to attack while it remains in the center of the board, hence the early castling to remove the King to a safer position. But conditions during the early moves often precludes castling, and proper early development of one's pieces can provide the strength to take advantage of the weaker King position. Here are 141 games illustrating attacks against such a King, with numerous diagrams to assist in following the attacking moves. The notes clearly explain the flow of the attack for the developing player. The author emphasizes the message to enjoy yourself! A quick attack against the opponent's King is a source of constant enjoyment, and here are the ways to accomplish this.

On the chessboard, an open line, a file or a diagonal, means an opportunity to attack. If a king stands on, or close to, that line then the opportunity is greater because the attack will be stronger.

Every game begins with the kings in the centre where they are most likely to be exposed to attack by the opening of files and diagonals. The first few moves of every game decide whether the king will be able to castle into relative safety or stand, and perhaps die, in the centre of the board.

Yet during those first few moves, the players have many other things to consider apart from the safety of their kings. They must establish a position in the critical central part of the board and they must bring into play as many of their forces as possible, in preparation for the future, whether that be attack or defence, or both. The games and positions in this book are arranged according to the direction from which the king is attacked. In this way, types of attack can most easily be seen. In the notes to the examples, you will find the most important aspect constantly referred to - the development of the pieces.

This is the real theme of the openings in chess. You cannot attack or defend without having your forces in play, so the opening is a competition in which you should seek to achieve more, or better, development. That is the real message of this book.

The other message is - enjoy yourself! The surprise attacks, the cavalier way in which pieces can be thrown away, the impossible positions you can put an opponent into and the way you can chase him down, are all part of playing the game, once you have established a superior position.