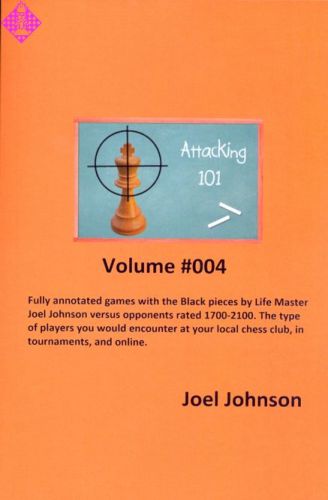 The goal of the books in this series (Attacking 101) is to provide detailed analysis of my own attack games played against lower rated players.

The players are generally rated in the range of 1700 to 2100. They make the same errors you regularly witness in your games but here you get to see a Chess Master dissect and exploit the moves, show why they are wrong, and how to punish the opponent‘s poor play.

This book covers Black Openings and has deep coverage of the Alekhine's Defense and the Polish (all lines).

ACCLAIM FOR PREVIOUS VOLUMES OF ATTACKING 101, BY JOEL JOHNSON:

Mark Marshall: "Exceptional chess book for the intermediate player. I hope Joel produces more just like this. Play like Morphy, Tal and Alekhine, get this book. 5 Stars."

Andrew Bland, Bradford, United Kingdom: "Brilliant, the almost move by move annotation is very helpful. It's a little sad but I'm quite excited about working my way through it - and already looking forward to volume 2. I've been completely re-visiting my repertoire after reading your comments about playing aggressive openings. For me Joel, your work is filling a huge gap in my Chess library."

Dr. Nicholas Sterling, Chess Horizons, Massachusetts Chess Association: "What is provided in 'Attacking 101' is illuminating, and does a superior job of linking opening to final position, or alpha to omega. This reviewer eagerly awaits Volume #002 and recommends this book to those who are ready to learn how to sneak up on their opponents with well-conceived and well-executed attacks."