Chess in London, Simpson's and The Savoy
Eigenschaften
Vergriffen 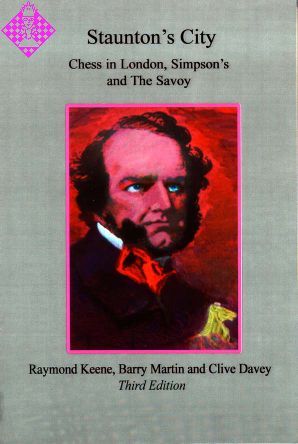 Howard Staunton was the dominating figure of British chess in the 19th century, as well as being a true Victorian polymath. He established himself as the champion of chess by convincing match victories against European rivals, such as St Amant, Horwitz and Harrwitz and he organised the first-ever international chess tournament, London 1851. Also, the modern pieces are named after him. His literary efforts helped to spread chess knowledge and culture in a way never before seen, while off the chessboard he further enhanced his reputation by producing an edition of Shakespeare, exposing Shakespearean forgeries and capping it all by producing a masterly exposition on the entire Victorian educational system - The Great Schools of England.

For several years the Staunton Society has organised a tournament in the great man's honour at Simpson's in the Strand, the traditional home of London chess. This book covers the first three Staunton Memorial tournaments. The authors are Ray Keene OBE, Grandmaster and chess correspondent of the London Times, chairman of the Staunton Society; Barry Martin, official match artist for the 1993 Kasparov v Short World Chess Championship and Hon. Sec. of the Staunton Society. Barry was also instrumental in putting up a blue plaque in London at Staunton's main residence. The authorial trio is completed by Clive Davey, the invaluable and indefatigable treasurer of the Staunton Society, without whose contribution the tournaments would not have been possible.