The store will not work correctly in the case when cookies are disabled.
Artikelnummer
SCOSHIMBGITNI
Autor
Alexej Schirow

Shirov, My Best Games in the Nimzo-Indian 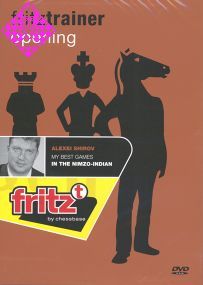 With this DVD on the Nimzo-Indian Defence (including the Catalan and the Queen's Indian) Alexei Shirov continues the successful and highly praised series about his best games. As in the preceding DVDs the Latvian super grandmaster succeeds in spoiling his public with analysis of a high quaility and with exciting insights into his games, and he does so in his own reserved, pleasant and modest style. The DVD concentrates on the Classical Nimzo-Indian with 4.Qc2. But when playing against the very solid Nimzo-Indian, which the author faced most often as White, it is enormously important to be able to vary your opening lines and so the author himself often switches to 3.Nf3; this then leads to games with 3...b6 (Queen's Indian) or 3...d5 4.g3 (Catalan). Amongst the opponents in the games he presents are, for example, Topalov and Leko. Video running time: over 4 hours.