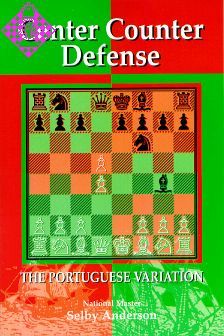 The Portuguese variation (1.e4 d5 2.ed5 Nf6 3.d4 Bg4) ranks as Black's most combative system in the Center Counter Defense, closely allied to the Icelandic gambit (1.e4 d5 2.ed5 Nf6 3.c4 e6). In the Portuguese Black offers a pawn for rapid development and the chance to exploit weak squares in the enemy camp. The resulting play is sharp and trappy, with plenty of "coffee-house" flavor for those wishing to mix it up as Black. An added benefit is the newness of the line, which came into prominence only in the early 1990s. Therefore many players of White can still be caught unaware, falling victim to an early knockout. No mere surprise weapon, however, the Portugese has been tested in the fire of world class tournament chess. Proof of the line's vitality is it's adoption by aggressive Grandmasters such as Spraggett, Hodgson, Shirov and Hebden.