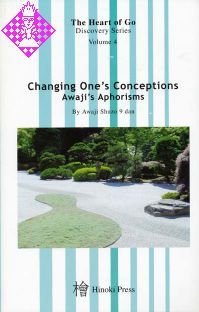 One of the most enjoyable aspects of go that one encounters are go proverbs. They may be wistful, whimsical or wise but they always encompass nuggets of knowledge regarding the game that one can gain insights from. Awaji Shuzo 9 dan is a top tournament professional player who has cultivated a taste for go proverbs over the course of his career and has gone so far as to invent a whole series of such maxims of his own. They illustrate the thoughts of a great player as he explains the game to himself.

However, Awaji 9 dan is also one of the most friendly and sociable of go players around. He loves to share his enthusiasm about the game and has opened his own go "cram school" (in Japanese, juku, which is the same word used for the schools that Japanese high school students attend in order to cram for college exams) where he rubs shoulders with average amateur players and shares his thoughts. This book shows how sessions at the Awaji Cram School are conducted, the give and take between players of all levels of skill and the way that refined technique is explained so that even weak players can understand and improve. Short of actually going to Japan to attend one of these classes, this book gives the reader an intensive workout that includes all of the elements that may be found in Awaji's training room.

In this work I have tried to use that experience to the best advantage to help the reader get stronger by conveying know-how in the form of "Awaji's Aphorisms." Things such as "Play a big point if there is time," "Pay attention to the distance between vehicles," "In go, the most important thing is restraint, the second most important thing is restraint" and "For men silence and for women silence is the best move" are watchwords that I often have occasion to voice at my cram school and I have tried to faithfully recreate here. It is necessary to master many techniques in go, but it is my opinion that more than that there are fundamental ways of thinking that are important to have at one's command. But then, there are not so many of those fundamental rules. — from the text

Chapter 2: One Point Move Correction Test 100 A Guide to the Awaji's Cram School