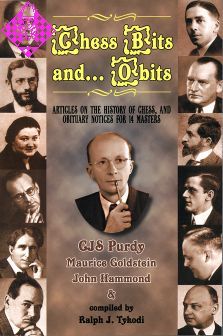 The Royal Game didn't happen overnight. "Old Chess" spread from India to Persia before going to the Arabic countries and then to Spain, France, Italy, Germany, and fi­nally, England. It went directly from India/Persia to Russia. The oldest known game is from a 10th century Arabian MS. During those "ancient" times the Arabs even played "blindfold" chess!

In "New Chess" Purdy ally and friend John Hammond writes about the evolution of chess theory. Then Purdy picks up again and takes us on a guided tour of some of the best known players during his era - by presenting biographies after their passing in his Chess World magazine, one of the premiere chess publications of its day. Selections of 67 of their best games, player eccentricities, and their contributions are written out in the best style.

Co-author Maurice Goldstein was one of International Master Purdy's (first world correspondence chess champion) trusted edi­tors and a worthy writer. This, at last, is chess to enjoy.

Cecil John Seddon (C.J.S.) Purdy (1906-1979) was four times Champion of Australia, an International Master, and the first World Correspondence Chess Champion. He published and edited what was arguably the premier chess journal of its day: Australasian Chess Review (1929-1944), Check (1944-1945), Chess World (1946-1967) - a continuing journal with an occasional name change. Purdy's game annotations and his writings on all aspects of chess have been widely praised. For some books devoted to Purdy's chess writings, see the items listed in The Purdy Library of Chess at the end of this book.

Lajos Steiner (1903-1975) was born in Hungary and settled in Australia in 1939; he was twice Champion of Hungary, four times Champion of Australia, and an International Master.

Soon after settling in Australia, each of Steiner and Goldstein be­came friendly with Purdy and helped Purdy edit his magazine - the two men were soon officially designated as associate editors of the magazine. Goldstein in particular was often de facto editor of the magazine when Purdy was ill or over-committed to other activities. The three men, Purdy, Steiner, and Goldstein, made many contribu­tions to the magazine on their own, as well as arranging for and edit­ing the contributions of others. By dint of their hard work, the editor and his associate editors made Purdy's magazine what it was - argu­ably the premier chess journal of its day.

John Hammond (1908-1997) was one of Purdy's closest friends. After Purdy's death in 1979, Hammond arranged for the publica­tion of a memorial volume, C.J.S. Purdy: His Life, His Games, and His Writings, J. Hammond and R. Jamieson, editors (1982) [the book was re-edited and published as part of The Purdy Library of Chess in 1997 under the title The Search for Chess Perfection and again in 2006 as The Search for Chess Perfection II ]. John Hammond was a cross-board chess player of moderate strength and a strong corre­spondence player; he had a deep interest in the history of chess, and he published in Chess World (1966-67) a series of articles on the evolution of chess theory.

The material appearing in the book is by C.J.S. Purdy, except where stated otherwise.

A date in parentheses after an item identifies the magazine issue in which the item appeared, in the form (month/year).

020 The Golden Age of Moslem Chess

026 THE OLDEST RECORDED GAME OF CHESS

031 Beginnings of the First Period

047 THE EVOLUTION OF CHESS THEORY

064 The Bright Eyes of Adolescence

070 From Soldiers of Fortune to Haut-Bourgeois

249 INDEX OF OPENINGS FOR NUMBERED GAMES

257 THE PURDY LIBRARY OF CHESS

259 CONTRIBUTORS TO THIS BOOK