The store will not work correctly in the case when cookies are disabled.
Artikelnummer
SCEMUECE7
Autor
Karsten Müller 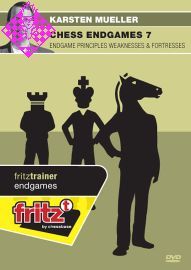 The new 7th volume deals with many different aspects of endgame play: the art of pawn play, weaknesses, converting an advantage, stalemate, fortresses, the art of defence and typical mistakes. But the themes are connected in various ways. If you do not master the art of pawn pawn you will end up with weaknesses. And your opponent then must know how to convert this advantage, which is not only important in the endgame. Learn how to convert an extra piece or an exchange or how to exploit space advantage and better mobility. The themes the art or defence, fortress and stalemate are also intertwined. Never give up prematurely. Always fight to the end and accept the new challange. If your position has a solid fundament then you may surprisingly reach a fortress which might even be based on a stalemate. Mistakes make chess fascinating. We all commit errors in all phases of the royal game. Make yourself familiar with the most common sources of errors and learn from your own mistakes and from the mistakes of others. Video running time: 5 Std. 40 min.