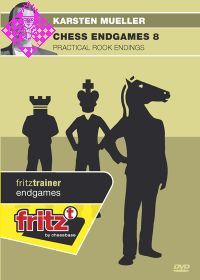 Rook endings are amongst the most frequently encountered endgames there are. And it is precisely the area in which the effort put into training is particularly quickly repaid in the form of half and full points, because the knowledge of even a few rules of thumb and methods makes life a great deal easier and provides a guiding light even in complex positions. The second DVD in Karsten Müller's series on the endgame was concerned with theoretical rook endings and was structured according to the distribution of material, but this DVD focuses on the themes which are to be found in rook endings. This course also starts with the endgame of rook against pawn because this particular constellation frequently occurs and can be understood and easily learned with the knowledge of a few techniques such as the bodycheck, intermediate check and the cutting off of the king. When looking at equally common complex rook endings, emphasis is placed on basic techniques (e.g. the umbrella) and rules of thumb (such as "rooks belong behind passed pawns"). But Karsten Müller also wants to help you with the training of your intuition. After all, the real art of the royal game can best be seen in the recognition of exceptions to the rules.