Chess on the Ledge 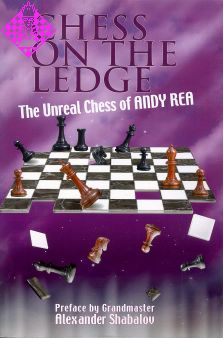 The Language of "Unreal"

How does one learn chess? How exactly does a 5 year old, fascinated by mysterious looking and moving chess pieces, become a grandmaster at 12? Where is the "point of no return" that forever separates a child prodigy from a strong player, potential from achievement?

If you try to answer these questions by skimming biogra­phies of leading players you will notice a familiar but false pattern in the portrayal of their growth. There are always a few examples of "early games:" some nice, but simple, tacti­cal shots or a series of boring, but flawless, positional games. These are designed to show us that the kid already possessed "it," the special magic of his later years. But overall these games aren't overwhelmingly impressive. And then in the next chapter, suddenly and without real explanation, the kid is already playing on a grandmaster level.

Going through book after book, you will find out that what happens in between - the most interesting part - is strangely omitted. Is it left out on purpose? Is it possible that these lucky few who managed to become strong just do not want you learn their secret?

Unless you are a huge adherent of "conspiracy" theories, I hope you understand that this is not the case. The reason that this exact moment of transformation - from the cater­pillar to the butterfly - is never documented is simply that it's impossible to identify. Even the player himself cannot point to it with any certainty.

I remember playing for the US Team in the 2004 Olympiad in Calvia, Spain. In the last round we were in a possible quest for bronze and got lucky in our pairing: the solid but beatable Norway. Our first board, Alexander Onischuk, was playing a promising junior - Magnus Carlsen - with the white pieces, By all accounts, he was expected to cruise to the victory.

And this was exactly what happened. Onischuk won, and we won 3 1/2 : 1/2 (still narrowly missing the bronze). The common perception of Magnus back then was that, while he was clearly on the way to become a strong Grandmaster, he would never become World Champion. "Just remember where Vassily Ivanchuk was at his age" seemed to be the universal justification for this way of thinking. Today, at the end of 2008, Magnus is the number two ranked player in the world and everyone seems to debate only one question - "When will he become World Champ?"

So, sometime and somehow, between 2004 and 2008, this amazing transformation took place. The whole chess work was the witness, but is anyone ready to suggest an exact time period when it happened? Can Magnus suggest it himself? I doubt it.

In this sense, learning chess can be compared to Zen studies. The key element in Zen is a "special transmission outside of teachings" from the teacher to a student. How does it work exactly? How come Shirov and myself learned to play chess the way Tal did? What made Hikaru Nakamura able to play like his coach, the computer (no offense to Sunil Weeramantry)? Nobody knows, and it is impossible to document. You can't "teach" somebody to play "combinational" or "positional" chess on purpose. All you can do as a coach is create a "right environment" for your student to grow.

I think this is exactly what Andy's book does. Seventy "made up" games, charged with "special transmission" mes­sages, create this atmosphere. When I first heard about Andy's concept, I imagined a bunch of ideally played boring "masterpieces," specially created for educational purposes. What a relief it was to discover this amazingly entertaining collection, with games ranging from a 14 move miniature to extremely complicated endgames with the most unusual ma­terial imbalances imaginable on a chess board. People often complain that the language Dvoretsky and other chess intel­lectuals use is far beyond an average player's understanding, but Andy's descriptions will be clear to all readers. Mistake free games are rare on this level and therefore most of the readers will find themselves in familiar situations time and again. Andy's "pictures from the exhibition" is an amazing "teaching without teaching" concept.

Andy was one of the strongest players in Pittsburgh back in 1992 when I first came there and his departure was a huge blow to the local chess scene. However you can't take the "Burgh" out of the person, and it is always nice to see some­one wearing black and gold on top boards of US Opens after all these years.

007 Preface: The Language of "Unreal"