The store will not work correctly in the case when cookies are disabled.
Artikelnummer
LXDIECPPM
Autor
Otto Dietze 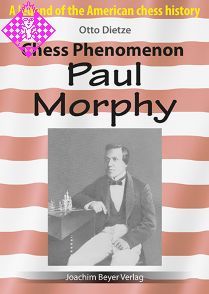 Paul Charles Morphy - compared with famous contemporaries like Adolf Anderssen or Howard Staunton - belongs to the 'enigmatic' personalities of chess history. Such a fate remains mostly reserved to those great players whose biography states, sooner or later: showed psychological abnormalities, isolated himself, became moody, a weirdo, a loner ...

In short - he was one of those who nourish and thus keep alive the folklore maintaining there's a fine line between genius and insanity.

However, it's not the aim of this book to illuminate the more or less obscure areas of Morphy's life, as it's not a psychological study, but a chess book. Thus, instead of a research of the soul, a search is to be conducted, a search for a reliable answer to the question as to what sort of chess player Morphy was.

The author is a chess historian whose main interest has always been this American 'superstar' of the 19th century - rightly regarded as one of the 'uncrowned world champions'. He has selected and annotated 100 of Morphy's most instructive games and traced his life's journey in detail - from the discovery of the child prodigy to his early death.

The result is a very vivid insight into a highly interesting part of chess history, which has certainly not deserved to fall into oblivion.

013 Morphy in the opinion of later chess authorities

014 The unsurpassed master of Open Games

067 Baptism of fire in the chess metropolis

138 Morphy and the evolution of chess

149 Survey of Morphy's tournament- and matchgames