The store will not work correctly in the case when cookies are disabled.
Artikelnummer
LXCORCS
Autor
E.G.R. CordingleyKen Whyld 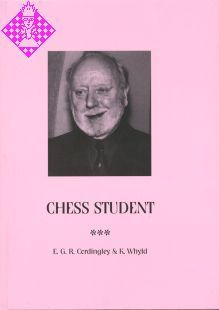 "Chess Student" is the third (and logically the closing) part of a trilogy of reprints we, the Ken Whyld Association (KWA), decided to publish. The predecessors were "Chess Reader" (published in 2004) and "Chess Christmas" (published in 2006), but that was not the correct chronological order of the early publications of our late friend Kenneth Whyld (1926-2003). With his engagement to revive Cordingley's Chess Students Quarterly Ken began his career as an editor of chess publications in his mid-20s. This reprint is also an opportunity to remember to Edgar George R. Cordingley (1905-1962), the man who "pioneered desktop publishing of chess books half a century before suitable tools were available." So I would like to offer some more information by Ken Whyld relating to Cordingley and his publications (cited mostly from Ken's article "Publishing Pioneer" in CHESS, December 1999, p. 36-37), first dealing with Cordingley's technique to produce his series of "limited editions":

"All of these publications were made by stencil duplication, a technique properly unknown to many readers. Waxed stencils were inserted into a typewriter, the key-strokes cutting the surface. The completed stencils were laid face down on a fiat inked surface, the sheet to be printed on the back of the stencil. A roller was then run over the lot, squeezing ink from the flat surface through the stencil onto the page." But as you will see from some of the pages of our reprint "the keys available on the typewriter limited the text, and real diagrams were not possible. Unless special semi-absorbent paper was used the pages smeared."

Whyld reported on his later friend: "... He [Cordingley] developed a reputation as an assiduous reader of proofs, [and] he prepared the indexes for Alekhine's book of the tournament at Nottingham 1936. The World Champion fully acknowledged Cordingley's help in preparing My Best Games of Chess 1924-1937 for the press (an acknowledgement suppressed in the reprints)." In 1934 Cordingley also began dealing in chess books and in March 1939 "he had what appeared to be a stroke of fortune", when he transferred his business to the premises of John Lewis, on Oxford Street, where the National Chess Centre also was sited. But an air raid on September 18 th 1940 destroyed completely Cordingley's stock of books, his address list, and the office equipment. "Fortunately Cordingley still had his typewriter and duplicator at his home, also slightly damaged by bombing. ... He served his country, in the RAF and was stationed for a time off the north of Scotland where his health deteriorated. He suffered from rheumatoid arthritis, and was invalided out [of the armed forces] in February 1943." Cordingley wrote his first chess book The Next Move is..., published in 1944, and reprinted several times. This was followed by Chess by Easy Stages and 122 Chess Problems, both published in 1946 for the first time. Ken Whyld talked of "an act of mercy" as both editions were substitutes for "the worst chess book[s] ever written", edited by a certain B. Scriven before WW II. Whyld continued: "... After the war Cordingley had achieved a long-held ambition to purchase an off-set litho printing machine ... Thus armed, he launched Chess Students Quarterly in November 1946. This was intended to be complementary to the two major British chess magazines, giving additional games and analysis, but no news or problems. All went well for a while. The first volume of the magazine had five issues (4a and 4b) to take it to the end of 1947, and the second volume ran to schedule, ending December 1948. After publishing the March 1949 number Cordingley's health collapsed. ... A partial recovery gave him the energy to produce a double number at the end of 1949, but volume III remained incomplete. ...We had become friends. I visited him in his home at Grange Hill ... and in hospital on King's Road, Chelsea. In 1950 we agreed a rescue plan. I would edit the magazine, and he would print and publish it. This was not ideal, given that it was printing that gave him the most pain, but it seemed practical. ... The relaunch in March 1951 had a double-number (12/13) simply to keep numbers in line with volumes, and the scheduled four issues appeared that year. Cordingley also published his final (18 th) limited edition, Budapest 1950 [recently reprinted - MN] and my book of the Bronstein-Boleslavsky match, an immediate sell-out of 236 copies. Perhaps he attempted too much, for after the issue for March 1952 Cordingley's health collapsed [again], and CSQ died."

Whyld created a nice idea: "Even today I have the material for the stillborn issue 18, and now that publication is so simple, I might even bring it out as a whimsical bibliographical curiosity", but our friend never realised it. But he acquired Cordingley's huge library and among the materials there were two unpublished manuscripts (A sequel to The Next Move is ... and Facts, Fancies and Fictions in Chess - which was partly used in Ken's Christmas Card of 198 titled Cordingley's Cuts.) and the stencils for Budapest 1921 which Whyld supposed to be intended as the edition number 11 of Cordingley's series. Ken was able to complete that work in 1953.

There is no better way to end this remembrance to that close friend of Ken Whyld's than with some very personal citations: "... among the middle classes it was not the custom in the 1950s for male friends to use forenames. The sign of familiarity was the dropping of the Mr. Prefix. ... I knew Cordingley's first name was Edgar, because his mother, with whom he lived, called him that, and I found that his second name was George when in 1954, chess behind him, he launched a small publication for lovers of alpine and succulent plants, calling himself George Cordingley. ... A cultured man, with no sign of xenophobia, he purchased a Messerschmitt bubble-car just after the war. He was quite amused that the two in-line seats made it look like a small version of the manufacturers' famous fighter plane. After his mother died in the mid-50s, deteriorating health forced Cordingley into a nursing home near Broadstairs where he spent his last painful years."

Both of my friends, Andy Ansel and Tony Gillam (the latter gave permission for this reprinting) were very helpful in compiling a complete run, as especially No. 1 of CSQ was rather difficult to copy. Last but not least I want to express my heartfelt thanks to Dr. Vlastimil Fiala (Olomouc, Czech Republic) for his friendly support with all three publications in this trilogy. But, dear reader, please be aware: The publisher should not be blamed for the bad quality of some of the pages reprinted - even the originals were awful.