The store will not work correctly in the case when cookies are disabled.
Artikelnummer
RLGHOSCSGC
Autor
Tony Hosking 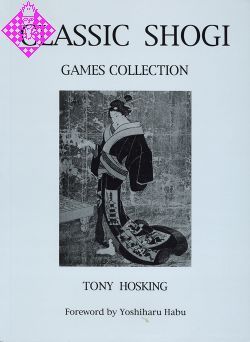 almost every game of shogi is exciting and decisive. It is hoped that this book will prove timely to help further the spread of shogi world-wide. "During the Edo era, shogi was played in a style which focused on the value of the centre In modem shogi gaining advantages in speed is emphasized 1 will be very happy if you feel such transition in shogi history from this book" (Y oshiharu Habu).

Having been most fortunately invited to attend the first game of a shogi title match in Tokyo by Y oshiharu Habu the title holder (Game 75 in this book), and being in the delightful company of Miss Yamato Takahashi (then Ladies I-dan) - we two removed our shoes and stepped into the playing room. Walking softly on the tatami (straw mats) to the large cushions provided, we knelt alongside the three officials alone al ready present. The continuing air of quiet expectancy gained momentum with the rustle of silk kimono, as first the challenger Maruyama (8-dan), then soon afterwards Habu (Oza), entered the room and each took his kneeling position at the wooden shogi table in front of us. Habu, occupying the honoured pi ace (kamiza), facing and farthest from the entrance, briefly smiled in our direction. In the near complete silence that followed, there was a clear sense of being in a seemingly timeless space, which allowed the players to concentrate without the least unwanted distraction. This atmosphere, in Japanese tradition, was one of beautiful restraint, producing a feeling of harmonious tension. Thereafter the silence became on occasion most sharply defined, following another little rustle, by the "dick" of a wooden shogi piece being moved ...