The store will not work correctly in the case when cookies are disabled.
Artikelnummer
LXFIACGOA3HC
Autor
Vlastimil FialaJan Kalendovsky 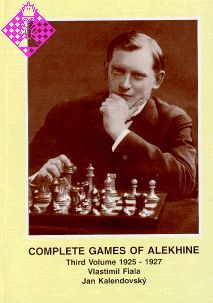 Three years after the publication of the first volume of our history dealing with the life of one the most gifted worldclass chessplayers Alexander Alekhine who held the world championship title from 1927 to 1935 and again from 1935 to 1946, the reader will have a chance to delve into the pages of the second volume.

A New World Record in the Simultaneous Exhibition

The International T ournament in Baden-Baden 1925

Three Puzzles in Alekhine's Life (His absence fram the 1925

Moscow tournament, his French citizenship, and his doctorate)

Simultaneous Tour of the Switzerland and the Netherlands