The store will not work correctly in the case when cookies are disabled.
Artikelnummer
SCMMARFSIPS
Autor
Andrew Martin 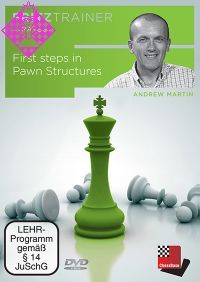 Understanding how to use pawns and how to handle different pawn structures are important topics for young or improving players to consider. On this new ChessBase DVD. IM and FIDE Senior Trainer Andrew Martin investigates the notion that ‘pawns are the soul of chess’ and tries to explain exactly what this means. The effective use of pawns in the opening leads to the correct development of the pieces and a good game springs naturally from there. The pawn structure must be considered throughout the game and this is something that Martin also touches upon. The viewer will be treated to a tour of excellent games, both old and new, many from the period 2012-2014, which highlight key ideas about the correct use of pawns and from which one cannot fail to improve one’s technique. Thus this DVD is ideal for players below 1800 or indeed ambitious players of any level.

Andrew Martin (born 18th May 1957 in West Ham, London) is an English chess player with the title of international master. Martin has won various national and international tournaments. He has been playing for years in the Four Nations Chess League, at present (July 2009) for Wood Green Hilsmark Kingfisher, previously for the Camberley Chess Club. Martin received his title as international master in 1984. He earned his first grandmaster norm in the British Championship of 1997 in Brighton. Martin was a commentator on the chess world championship between Kasparov and Kramnik in 2000. Martin is known as a professional chess teacher and head trainer of the English youth team.